The smell of wood shavings, roosters crowing, Kosta’s gyros, and tractor pulls– these things take me to thoughts of the fair.

Change is bittersweet; the kids have grown up the 4H animals have mostly gone, for me it is the end of an era. We started 4H when my oldest son was in first grade, he was a Cloverbud. The girls were not quite old enough to join, but they happily tagged along to the meetings and were included in the Cloverbud craft activities. Now the youngest, who is in her 13th year of being a recognized 4Her, has really had 20 years of practice.

Camping at the Fair

I remember the first fair very well, my son had to speak with the judge about his project. Not alone, but in a group. He would not come out from behind an exhibit and was in tears. I thought that was the end of the whole thing there. He was petrified, and I was frustrated, as it happened it was not the end of 4H or the tears.

We did persevere. Within a couple of years he was old enough to be a real 4Her, which meant that he could show livestock! A trip through the goat barn and a peek at the 3-foot-tall, gleaming, pillared trophy for showmanship was all that it took, and he decided that he wanted to show goats. With a couple of bottle kids we were in the goat business. We all learned a lot. I remember coming home one day and the goats were so delighted to see us that they ran to the car and jumped on the hood. Despite the bad habit of escaping any fence and eating my fruit trees, flowers, jumping on anything that they could; we kept goats.

Preparing for Fair with a Pretty Hair Cut

There is a lot to know about showing livestock, a real technique to getting it right. The first year is definitely a learning year, there are the things like training your goat to walk even when IT doesn’t want to, how far before the fair to shave the goats for proper hair length, where to stand in the ring, how to line up or to move around the ring, and how to set up the goats’ feet. Did you know that you shave the udder on a milking doe? Please do not forget to wipe their bottom right before you go into the ring– it could be the difference between being top showman and runner-up. One thing that should not come as a surprise is that when it is time to go into the auction ring with that market wether that you raised from a couple of days old to be sold, there will be tears– both kid and mom, the human ones. We persevered, fortunately he went to a pet home and not a freezer. We never sold another goat in the fair auction. There were more tears, however; first time my daughter went into the showring it was Cloverbud judging all over again, but we persevered.

Friday night, the goat show. All the exhibitors were friends and helped one another outside the ring, but once they were in the ring for Showmanship (remember that HUGE trophy?) it was dog eat dog, there was no “friendly” in the competition they were out for blood. Imagine the judge is a mouse and they were all three cats, the look of intense concentration on each face as if they are ready to pounce. Through the years there were three kids that fought every year for the top award. My son never won against the top showman at our fair, once at another show, but never to get the big travelling trophy. At times it came down to how well a hoof was trimmed or a question that was a stumper. After all those years, they put his name on the trophy– as an honorary top showman. He could have shown two more years after he started college, but his competition had aged out and were no longer there to beat–it just was no fun to win if it was not against the best.

The kids showed sheep for a couple of years, but at our fair if they aren’t market sheep they don’t count. They showed against one another, just a toss-up as to who would get Champion and who would be Reserve Champion in their class of two, so it fell by the wayside.

Chickens were always part of the farm, so it made sense to join the poultry project. First year we brought birds was the last year for the Poultry Barn Superintendent, so how hard could it be… sure I would do it. There were two of us newbies that had no idea what we were getting into. At the peak of the poultry years we had over 300 birds in the barn. Did you know that you wash and blow dry chickens for show? A little Show Sheen on the black ones really makes them glisten. In the beginning most of the chickens at the show were the run of the mill, feed store birds, but as we added trophies the competition picked up and we started to see some breeder quality show chickens. The first pair of show quality chickens we had were a pair of Cochins, beautiful, black, fluff balls. With so many varieties of chickens, I think the Poultry Barn is the most interesting place at the fair. I might be bias though.

Geese at the Fair

Every year we wonder how the Poultry Barn can continue to stand, through rain and snow, it just becomes a little more swaybacked. For a long time, we had hoped to build a pretty new barn–like the sheep and swine have, but after 15 years sitting in this barn for the 5 days of fair, it is kind of home and new one would not feel quite right. I guess it is like a comfortable pair of jeans, it has its flaws, but just feels right. 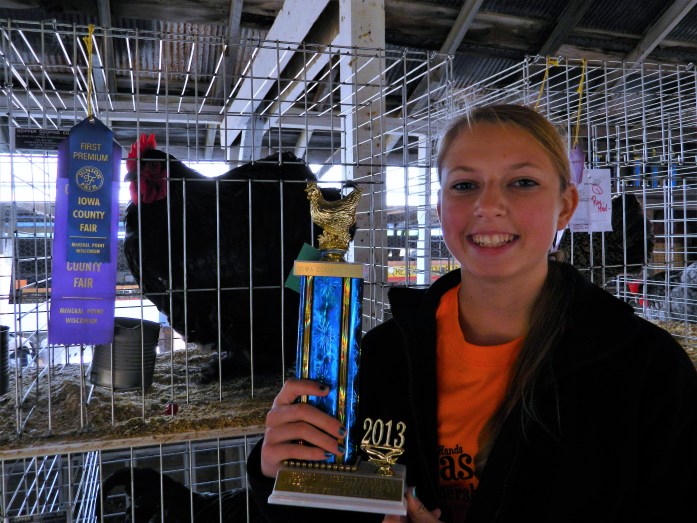 As I sit here on the next to last day of my last year in the role of Poultry Superintendent I reflect over the time spent here. This year we didn’t load up any critters, there were years that our truck full of goats, sheep, turkeys, geese, ducks, and chickens pulling a little tent camper looked more like something from the Beverly Hillbillies or the depression era westward movement than the other sleek trailers and transports on the grounds– we were just missing granny sitting in her rocking chair on top. One thing that will bring me back to the fair in the future is Kosta’s gyros. I suspect around the first week in September I will have an overwhelming craving for one, or maybe two.

By the time poultry check in was completed Thursday night it was too late to see how the projects in the fair house had done. It was our ritual to head up early Friday morning and linger over all of the amazing projects that decorate the fair house. We spent much time critiquing and learning from the photographic efforts on display. High honors of Special Merit or State Fair Selected ribbons were very exciting. 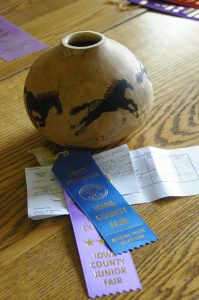 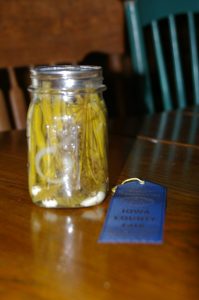 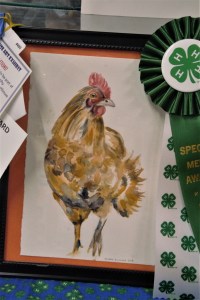 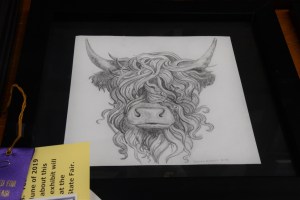 Diesel smoke and loud engines drifting into the poultry barn will not be something I will miss, after years of listening to and smelling Friday and Saturday night pulls I think I am good for a lifetime. Thinking of the canary in the coal mine, I always half expected that with one of those drifts of smoke we would see the chickens beginning to drop over, but it never happened that way. There was that time that the little girl stood there smiling to the bidders, while her dad carried her big market bird around the auction ring for her. He was holding the chicken’s head up so that it appeared alive because it picked the auction ring to take its last breath. Do not be sad, it was destined to expire very soon anyway so at least it was able to choose the time.

So now my time has come, no more clipping goats, washing chickens, getting caught up in the excitement of seeing one of the kids win a blue ribbon or Champion, or flurry of last-minute projects. Just a few more tears as I lock up the barn one last time. Who knows, maybe one day there will be another generation of 4Her’s that will need an experienced chicken washer!

Welcome to Utopia, Sort Of, What I Love About the Farm